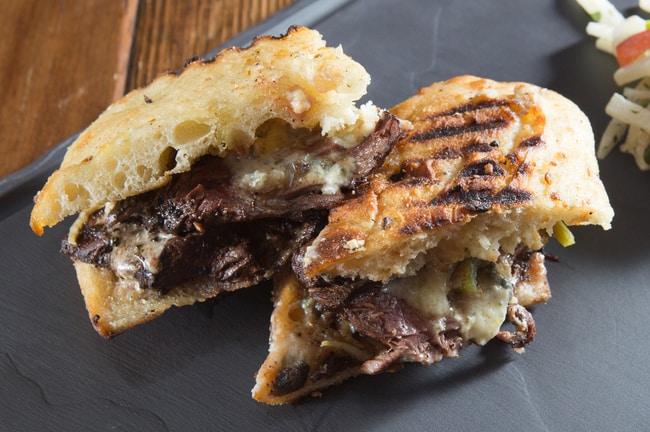 For a hearty lunch, a fuss-free dinner, or even a weekend breakfast, there’s nothing quite as delicious and versatile as a panini. You can get one at most sandwich shops and casual restaurants, but they’re not cheap; buy a panini on a regular basis, and it can really start to drain your wallet. More and more people are becoming interested in making their own paninis at home, with their own affordable ingredients, but it’s not really something that you can make in an ordinary frying pan.

One of the reasons why a panini is so delicious because it’s pressed, allowing the ingredients to blend well, holding the sandwich together, and providing that awesome textural contrast of crispy on the outside and soft and melty on the inside.

There are lots of choices when it comes to purchasing your own panini press, but if you’re serious about making great paninis at home, then you’ll want to choose one that’s made of cast iron. Why is this material superior, and what’s the right way how to use a cast iron panini press? Read on, and we’ll tell you.

The Advantages of Cast Iron

Trained chefs and home cooks alike have known for years that cast iron cooking tools are the best. The main reason is that they cook evenly; cast iron holds heat exceptionally well and distributes it with fewer hot spots than you’d get with a stainless steel pan. They’re also non stick once they’re seasoned properly, and these days, most cast iron, including cast iron panini presses, come pre-seasoned. Plus, they are equally effective on the stove top and in the oven.

Cast iron pans also last forever. These aren’t pans that you’ll have to replace every five years! In fact, take good care of your cast iron, and you’ll be passing it on to your grandchildren. Finally, cast iron pans, including panini presses, can be surprisingly affordable. Yes, there are boutique and high end makers of cast iron pans and panini presses, but if you aren’t choosy about brand, you can get a good one for a relatively low price.

How to Use a Cast Iron Panini Press

Before you get to pressing your panini, you’ll need to do two things: preheat your press, and assemble your sandwich. First, place your pan over one burner on medium heat, and place the press over another. You want to get both parts nice and hot so that when you press your sandwich, it gets heat from the top as well as the bottom.

While everything’s warming up, take a few minutes to get your sandwich ready. Choose sturdy bread, a meat or two if you like, some toppings like onion, roasted peppers, or even sliced apple, and then cheese. The cheese is crucial because it helps to hold all the other ingredients together.

Put your ingredients between your two slices of bread, and then brush the top slice with some oil or melted butter. Then, place the side you just brushed down in the hot pan and brush the top before you cover it with the hot press. You should hear lots of sizzle — that’s good! It means everything is heated properly and will get your panini hot and toasty.

Watch your sandwich carefully; it shouldn’t take more than five or six minutes for your panini to be crispy on the outside and soft and gooey on the inside. When it’s done, carefully remove it from the pan, cut it in half, and enjoy!

Think Outside the Bread

Some people may be reluctant to buy a cast iron panini press. After all, why does anyone need a big fancy pan that’s only good for sandwiches? It’s a fair question, but if you think outside the bread, so to speak, you’ll realize that a panini press is great for cooking all sorts of things.

For example, chicken cutlets, pork chops, and steaks all taste great when they’re pressed on a panini press. It’s also a great way to quickly cook slices of large vegetables, like eggplant, peppers, and big zucchini. You may also like to know that a cast iron panini press makes wonderfully flat and crisp bacon, perfect for BLTs or any other sandwich. Really, there are lots of possibilities for a cast iron panini press beyond hot and toasty sandwiches.

There are lots of cast iron panini presses on the market today, and their prices are all over the spectrum. You can get a no-name press for under $20, you can get a luxury brand press for over $200, or you can go somewhere in between. As long as it’s relatively heavy, you’ll have a great pan that will last for years and help you prepare delicious panini, along with a wide variety of other dishes. Give it a shot — you may be amazed at the incredible panini that you can prepare right in your own home with the help of a cast iron panini press.